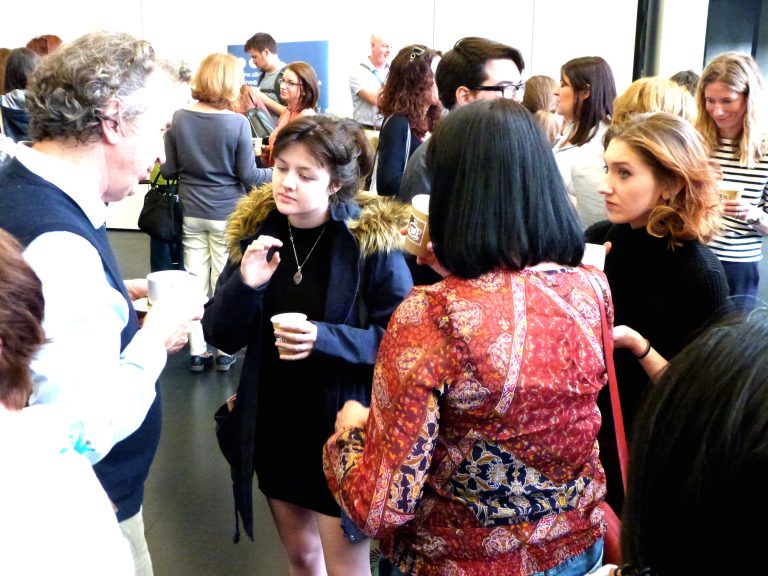 Good morning! This is an un-plugged presentation: there are no electronic devices. I speak as one who has illustrated a few books and is involved with art education.

Picture Hooks, this is it.

We all know a picture when we see it.

And a hook, naturally.

The pop song, Waterloo Sunset has a beguiling if repetitive hook.

There are different kinds of these things . . . real or symbolic.

And I would like to talk for a moment about lines, ‘the line’, in fact.

This parcel has been addressed to me at this event, today!

(picking up and showing parcel)

I have a sharpened 9B pencil as it happens, between the fingers and thumb of my right hand.

This is applied with varying pressure to the surface of the paper to make a continuous line : a fish, drawn here on the back of this parcel.

(line drawing of fish on back of parcel)

And it has a picture frame!

Which is not real, it is an illusion!

This represents my thoughts, ideas and feelings at this moment, fixed here on the paper.

But the moment has passed.

Now I am thinking about something else!

However, the image remains . . . and, so do the thoughts, ideas and feelings.

This is a philosophy seminar, isn’t it?

Or have I come to the wrong University?

No, it is Picture Hooks, I know.

So, let us unwrap this subject a little.

Here we have stack of books, eight in fact; the proverbial slim volumes:

These are classic books for children and some written and illustrated by Edinburgh College of Art alumni and staff such as Vivian French.

For whom, three cheers I say!

Neither pictures nor text are dominant. They are mutually dependent, more or less.

But what do books really contain?

Just paper and ink, that is all: pulp.

No, that is not all, they contain words and pictures. It is that elemental and profound combination which defines Illustration’s identity and purpose to a very considerable extent, I believe.

Neither pictures nor text are dominant. They are mutually dependent, more or less.

But theirs is an interesting and sometimes troubled relationship.

A book will have a title, one line, just a few words strung together, which tells us something about the story within.

And so, I would like to reflect upon the line, as a significant element of language:

Catherine Rayner draws and illustrates. And she makes prints.

In these pursuits, an implement is held by hand, pen, pencil or brush and applied to the surface of paper to make a mark.

This has character that is uniquely Catherine Rayner’s, even when the image is reproduced in a print-run of five thousand books.

Artists will talk about ‘line’ how they use it, Jean-Auguste Dominique Ingres, for example, or Paul Klee. Incidentally, Giacommetti erased his lines in part many times, over and over, to accumulate the ghost of an image. This Swiss sculptor’s work is currently at the Tate. He made a series of beautiful lithographic illustrations of the streets of Paris.

Art students are tutored in the application and meaning of line.

Pictorial line depicts shape and form, as well as conveying movement, a story, character, or appearance.

Literature has vocabulary, syntax, and punctuation. Music has its metronomic number, for example, to denote speed: allegro vivace, 140 beats per minute, which translates as Quick and Lively. The books on this table have pace, within their pages of story-telling.
Speech has cadence, pauses, timbre and volume.

In all of these endeavours, line captures the imagination.

Recently, listening to Brett Westwood’s Dawn Chorus on Radio 4, I was inspired by the connections between literature, sound and visual art, which prompted reflection upon the identity of Illustration. Dawn Chorus was an informal and cultured commentary on the song of waking birds, brilliantly recorded by Chris Watson.

The commentators included Mark Cocker and a bird acoustics expert Dr. Jenny York; Tristan Gooley; Will Young and Hanna Tuulikki, a singer from Finland. We heard first-hand the unison song of many birds, in a subtle cacophony of sound for the rising of the sun.

At various art college seminars, a little like this event today, thinking in terms of sound and vision, I have presented musical pieces.

These were syncopated melodies and rhythms, lasting for about four minutes. The pieces were composed to evoke a railway journey.

Melodic lines, interweaving between the treble and bass, (98 beats per minute: Andante), gave a sense of time, space and movement. recalled the vocal rhythm Night Mail by W. H. Auden, and the turning pages of Robert Louis Stevenson’s From a Railway Carriage by Robert Louis Stevenson whilst reading to my own children.

There are many train-songs, highway songs, naturally, and stories in literature about such things. Not necessarily for children, but sometime so.

Speaking as an illustrator, I have made work for three of Mark Cocker’s books, as well as his essay on birdsong, for the BBC Wildlife magazine. I scripted a verse of John Clare’s Ode to a Nightingale within a double-page spread, to illuminate this piece of writing.

As said earlier, these connections encapsulate poetry, literature, radio and book illustration, which recalls an earlier time when I made a series of Radio Times illustrations for readings on Radio 4.

This brief entailed distillation of the essence of a novel into a single image. It was commission that inspired the House Style project at Edinburgh College of Art, at a later time, which is another story.

Again, these are small-scale illustrations for the page but they also complement the activity of listening.

All of my illustrative lines are engraved into woodblocks before they are scanned and reproduced in print.

For editorial design, the result is a unique image made in response to a particular text, which is then mass-produced to the tune of a 750,000 print-run.

Within society, these are somewhat ephemeral illustrations for magazines but they do have a wide scope of communication.

However, books have a much longer life-span.

And so I must return to this parcel:

Here we have owls, monsters, wolves, giants, children, hares, a Sealyham terrier and a unicorn. These are wild creatures, each illustrated with a different emphasis of weight, shape, colour and the qualities of line.

In this book, Anine Bosenberg’s unicorn is beautifully composed in photoshop, with clearly delineated colour, originating from the qualities of gouache. This is a fine example of contemporary methods used in a rather traditional mode of book illustration.

Maurice Sendak spoke of the essential importance of music in his work, and the eminent lineage of which he is a part, from medieval illuminated manuscripts to modernist German book illustrations for nursery rhymes and Winslow Homer.

Sendak’s art has its roots in these European traditions, as well as in folk art and Polish culture.

To conclude this talk, for Picture Hooks I wish to celebrate these extraordinary strands of story-telling in the realms of imagery, text, and sound.

Also, I celebrate the cultural relevance of contemporary Illustration and its place in the lexicon of art school subjects. I speak as one who has illustrated a few books, so I celebrate the excellent initiative for emerging illustrators that is Picture Hooks.

This is a transcript of Jonathan Gibbs’ introduction speech at Picture Hooks Conference 2017. Click here to read more about the day and interviews with the panelists.